GRAND RAPIDS, Mich. – The recipient of the Interurban Transit Partnership (“The Rapid”) 2018 Bus Operator of the Year Award is an El Salvadoran who’s made the American dream come true in Grand Rapids.

Yemny Garcia was born in Central America’s smallest country and came to the United States when she was 11 before arriving in Michigan 14 years later. Today, the Grand Rapids mother of three daughters is being recognized with The Rapid’s highest honor for public service on National Transit Driver Appreciation Day.

“The Rapid’s bus operators like Yemny keep our community moving,” said Michael Bulthuis, The Rapid’s Marketing and Communications Manager. “They maneuver through traffic and weather conditions of all kinds to get our riders safely to work, school, appointments, and everything in between. And on top of ensuring the safe and timely arrival of passengers to destinations, they also must check fares, give directions, and ensure that the needs of passengers are met accordingly.

“Let’s be honest, bus operators make multitasking look second nature. And most do it all with a smile – especially Yemny,” Varga said. “I’m proud to say Yemny Garcia epitomizes the hard-work ethic that demonstrates all the qualities we celebrate on National Transit Driver Appreciation Day.”

The Rapid’s annual Bus Operator of the Year Award is based on monthly performance reviews of the Greater Grand Rapids public transportation system’s approximately 300 drivers by supervisor staff in combination with peer driver input. Garcia earned the accolade based on her winning attitude and willingness to help passengers over her 12-year employment record with The Rapid.

Garcia, who praised her mother for inspiring her to pursue a bus driver career in the historically male-dominated public transit operator industry, credited her colleagues and the passengers she greets daily for motivating her to do her best.

“It’s amazing. It’s a privilege,” Garcia said about the award. “To my passengers, thank you for riding The Rapid. Thank you for being part of this community. So, respect us, value us, as we are. And for our drivers, keep on doing the good work every day we go out there.” 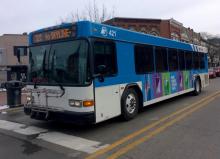 The report shows the four major bus routes between Ann Arbor and Ypsilanti had some of the highest ridership, with 2.7 million trips clocked between routes 3, 4, 5 and 6 combined.

View the route by route report at http://www.mlive.com/news/ann-arbor/index.ssf/2018/03/see_route-by-route_ridership_f.html

Christine Gran had to take two city buses, then walk the final block and a half to her volunteer job, paying fare from her meager Social Security income.

"This is something the seniors have been asking for a long time," said Cynthia Kienlen, director of Grand Traverse County Commission on Aging, which launched the 90-day pilot project in November.

"They don't have to transfer buses, navigate our systems. We're trying to make it as seamless as possible," he said.

In its first six days of service, the propane-fueled bus covered 367 miles in 85 trips, Lingaur said.

"The majority were for personal and medical needs," he said, adding that rides can be reserved from two weeks to 24 hours -- and sometimes less -- in advance. "We're averaging 14 trips a day, which is pretty good."

Gran, 72, uses the bus to get to her volunteer job at a governmental center and eventually hopes to take it to exercise and other appointments at Munson Medical Center.

"The COAST is an absolute blessing," she said. "It saved me financially, plus it's such a joy to have a conversation on the bus with someone who is my own age."

The bus seats 19 and has room for four wheelchairs. Passengers can even bring along a caregiver or family member, Kienlen said.

"The bus driver helps them in and out of the bus. Going forward we're looking for COAST ambassadors to help them a little more on the bus," she said.

Lucy Hofmann took city buses three to five times a week until a fall made it harder for her to walk to or wait at stops. Now she uses COAST for regular trips to the grocery, health food store, bank and the post office.

"Transportation is such a big part of aging at home," said Hofmann, 88. "It gives you freedom and independence. As long as you can do things for yourself, you're OK."

The pilot project ends Feb. 13, after which Kienlen plans to go back to the Grand Traverse County Board of Commissioners to request a continuation of services.

Current COA members are already approved to ride COAST. Other county residents 60 and older can become COA members by verifying their age and residence with COA at 231-922-4688. Call COAST at BATA at 231-941-2324.

The MTA fleet will include 50 new CNG vehicles arriving over the next 20 months. In addition to fulfilling MTA’s requirements for fueling, the station will be open seven days a week, 24 hours a day for public use. The station will be built on-site at the MTA’s alternative fuel facility located at Dort and Maple roads in Grand Blanc.

The MTA currently operates 155 propane powered vehicles and partners with the Genesee Intermediate School District, providing fueling for their new propane vehicles. Plans call for the elimination of all diesel vehicles in MTA’s fleet. The MTA is approaching an 80% alternative fuel fleet.

For the Mass Transportation Authority, it’s the beginning of a great new relationship with Consumers Energy. “This is an exciting opportunity for the MTA to advance our alternative fuel program for current and future needs while providing a benefit to area businesses and the public,” said Ed Benning, MTA General Manager and CEO. “We’re looking forward to working with Consumers Energy.”

Back Up Cameras / Monitors

View all Jobs and RFPs

Jim Mildren is the longtime manager of the Gogebic County Transit system in Ironwood, Michigan at the westernmost point of the Upper Peninsula. He is an avid outdoorsman, bicyclist and runner and enjoys writing about nature and the world around him. Jim traditionally reads a new poem or two at every state transit convention he attends and is considered the Poet Laureate of the Michigan Public Transit Association. Visit the Poet Laureate's Archive »